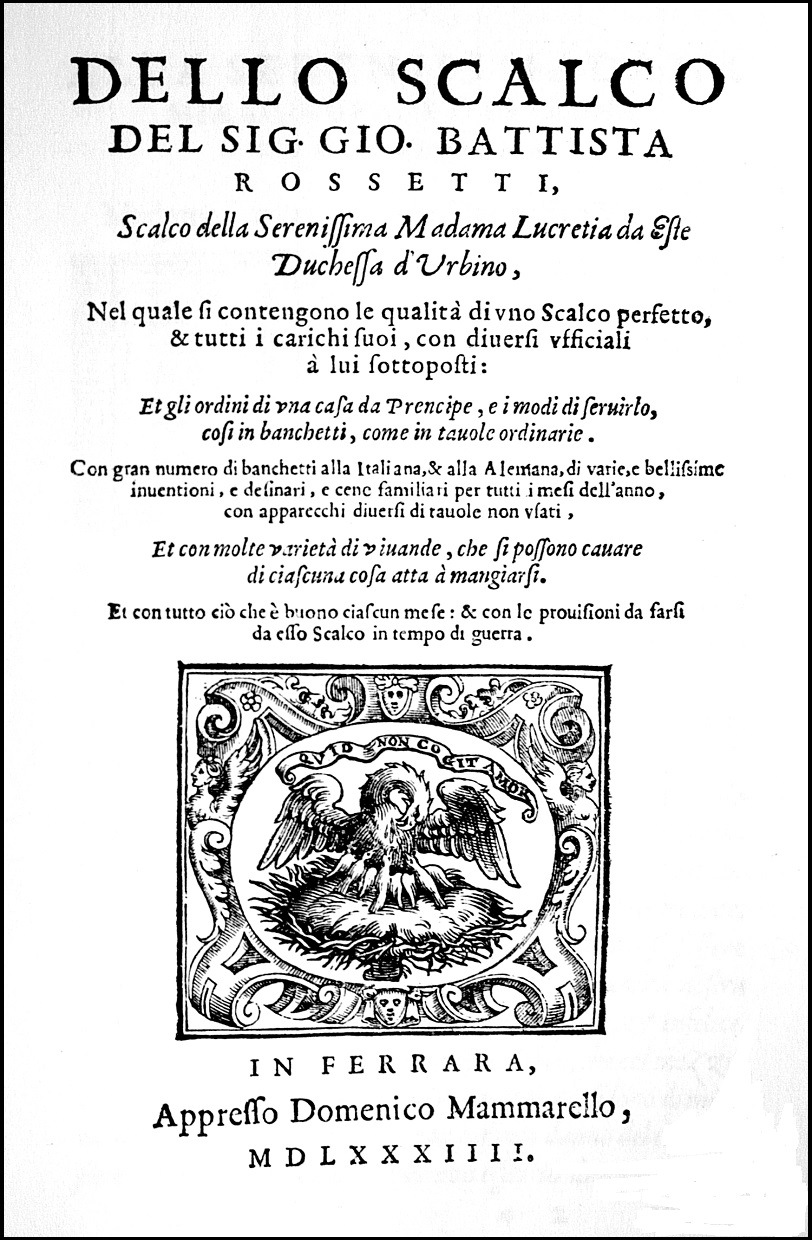 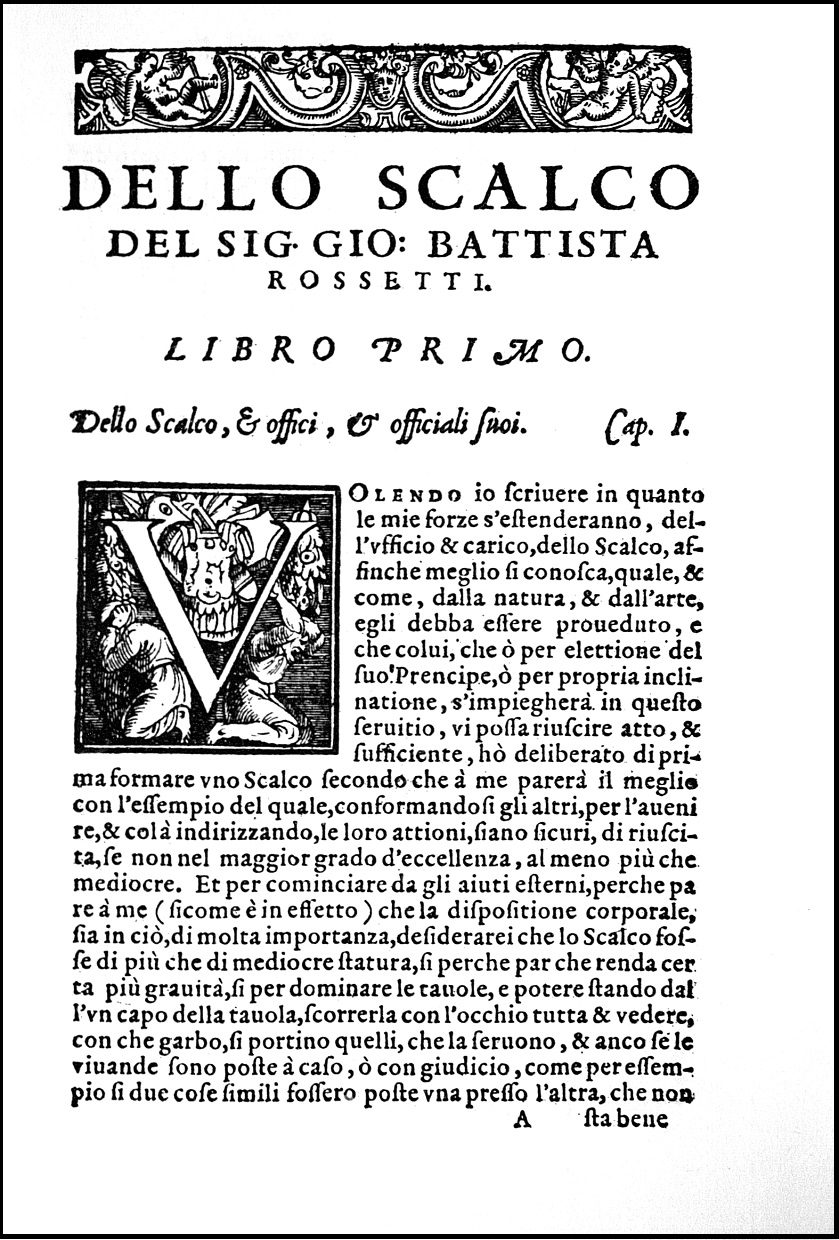 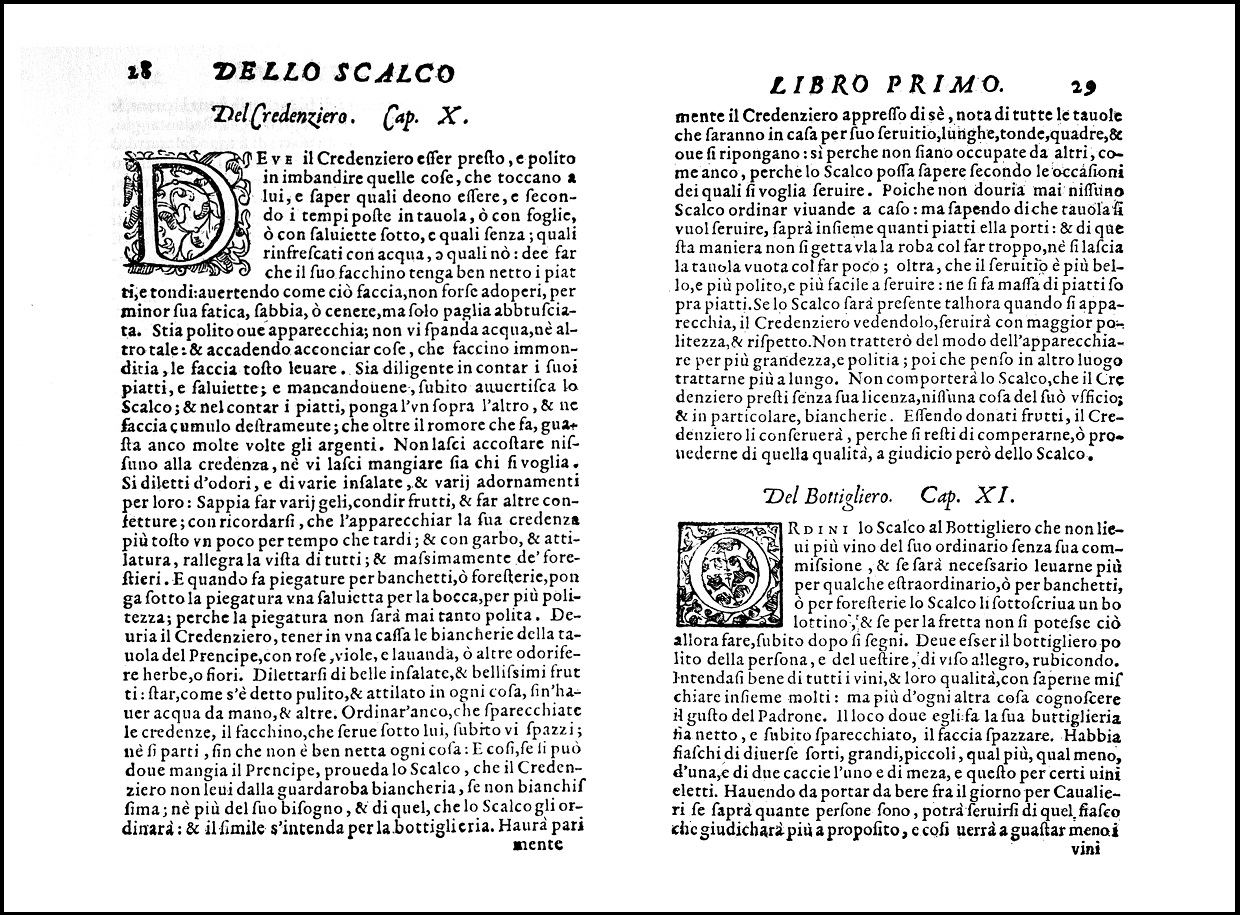 First edition of this famous treatise, a real compendium of all the culinary literature on scalcheria appeared during the sixteenth century. The author, Giovanni Battista Rossetti, was a scalco and  banquets planner at the court of the Duke of Ferrara Alfonso II d'Este. He is remembered in the history of recipes as the creator of the pumpkin tortello. The texts produced by celebrities, such as Rossetti, who worked at the Este court after  Messisbugo, are of great historiographical importance today, as their multidisciplinary preparation provides a cross-section of everyday life, confirming the ease of noble families. In this book, the scalco Rossetti, praises the skill of French and German chefs in the field of food, condiments and sauces, specifying however that much of this they "learned from our Italian cooks", reducing it to "excellent perfection" with the addition of "a new cleanliness.

But who's the Scalco? Dressed in black with a large feathered hat and short sword at his side, he is the skilful director of that composite show that sees the guests sitting at the table in the role of consummate actors and at the same time of attentive spectators. He chooses the arrangement of the serving dishes that will be placed on the tables according to a perfect symmetry of form and content, he coordinates the various combinations, indicates to the carver the order in which the various dishes are to be cut, sets the rhythm of the courses, determines the precedence in the service on the basis of the nobility and rank of the individual guests, coordinates the change of tablecloths and napkins at the end of each service, ensures that the empty serving plates are promptly removed and replaced with others that are always different so that the table conserves a harmonious overall view.

The work also contains a large number of recipes, often innovative and some still in use today. We find here in fact the first references to "pumkins tortelli with  butirro". The ingredients are the same as in the current recipe if it were for the addition of some spices, such as ginger and pepper, which have now fallen into disuse but were particularly popular at the time. In the same recipe book, Rossetti reports the list of dishes served in particular circumstances, such as, for example, the arrival of princes, diplomatic representatives and eminent men hosted by the Duke. From here one can understand how the "Cappellacci di zucca ferraresi" (then also called tortelli), were considered luxury and prestigious preparations, despite the "poor" ingredient of the filling, and in any case worthy of being served at table on official occasions. Cappellacci di zucca' differ from 'Cappelletti bolognesi' or 'Cappelletti modenesi' not only in the composition of the filling but also in the larger size of the shape: hence the origin of the Ferrara dialect term caplaz or tortelloni, with which the people from Ferrara identify the product.

This website uses cookies to improve your experience while you navigate through the website. Out of these cookies, the cookies that are categorized as necessary are stored on your browser as they are essential for the working of basic functionalities of the website. We also use third-party cookies that help us analyze and understand how you use this website. These cookies will be stored in your browser only with your consent. You also have the option to opt-out of these cookies. But opting out of some of these cookies may have an effect on your browsing experience.
Necessary Sempre abilitato
Necessary cookies are absolutely essential for the website to function properly. This category only includes cookies that ensures basic functionalities and security features of the website. These cookies do not store any personal information.
Non-necessary
Any cookies that may not be particularly necessary for the website to function and is used specifically to collect user personal data via analytics, ads, other embedded contents are termed as non-necessary cookies. It is mandatory to procure user consent prior to running these cookies on your website.
ACCETTA E SALVA