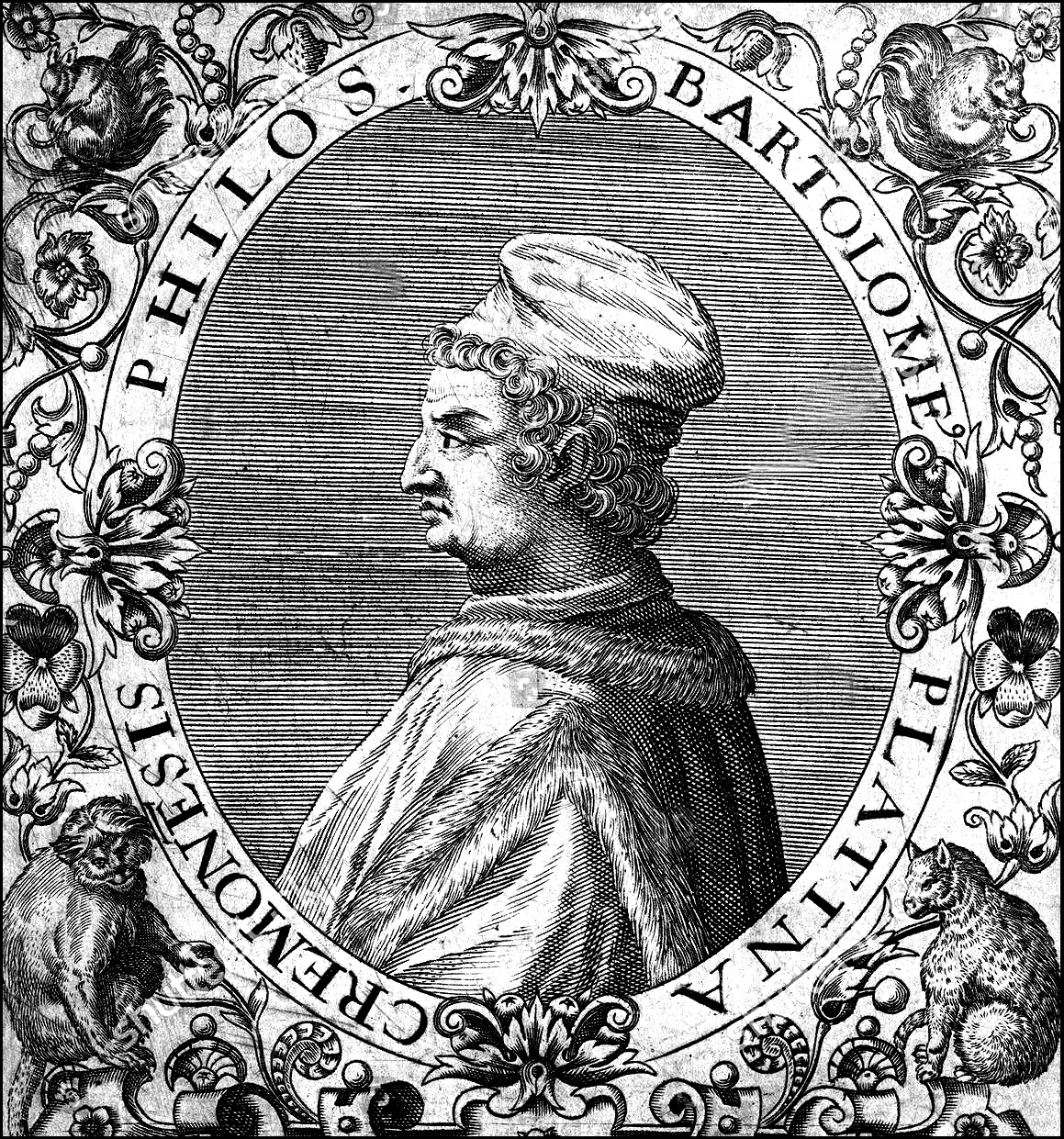 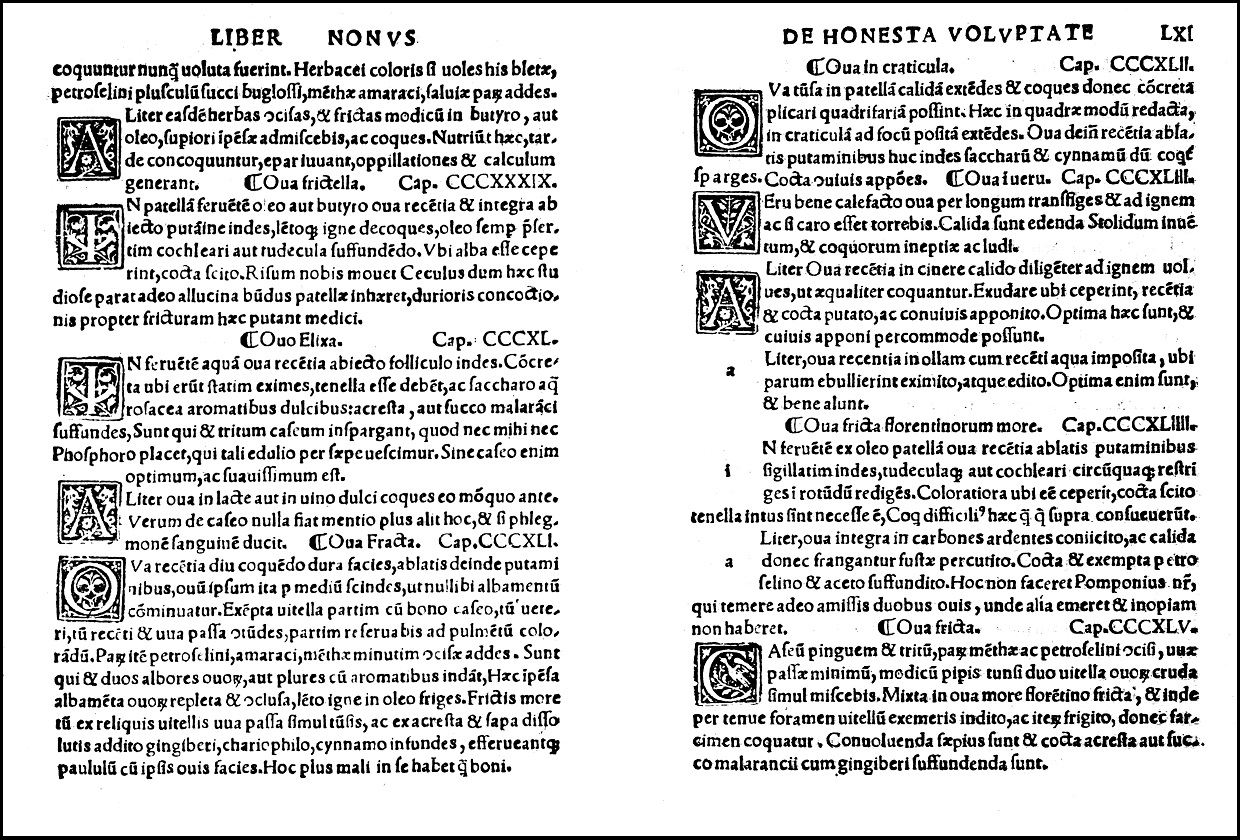 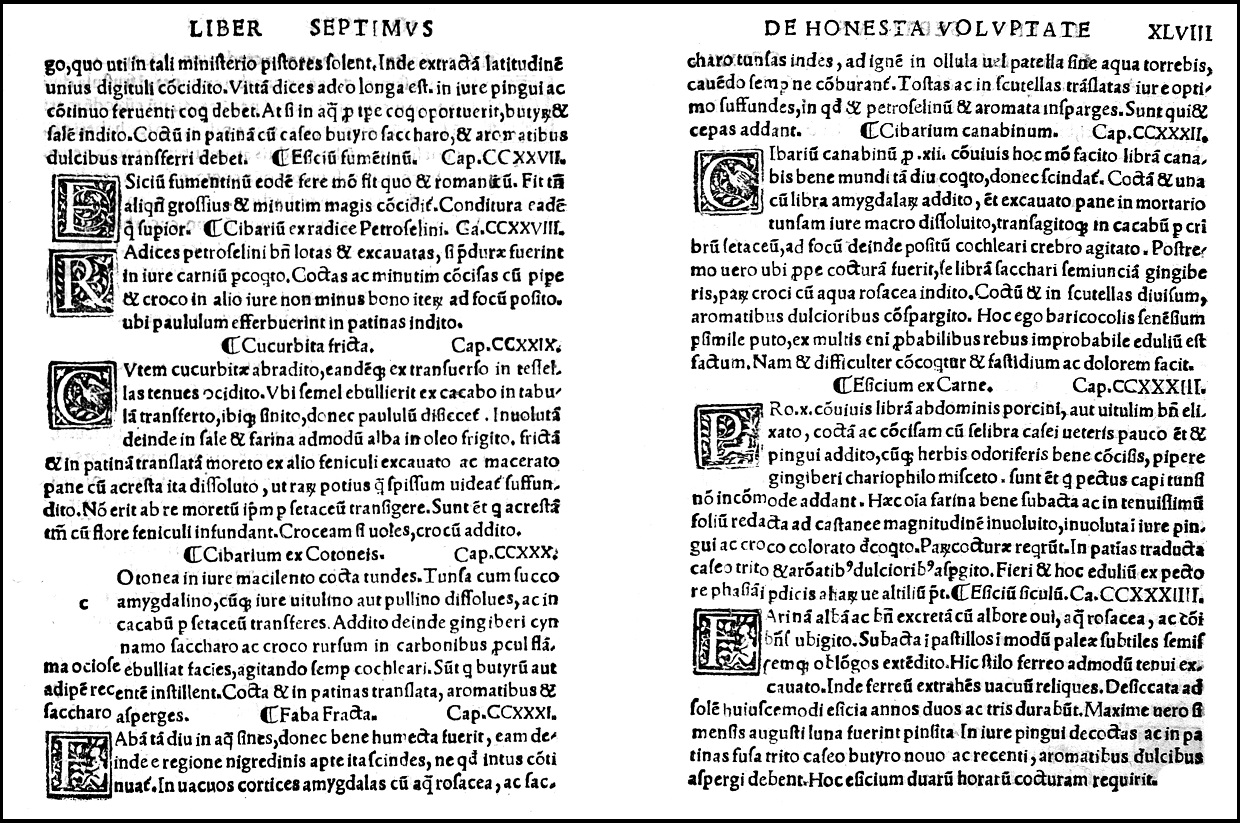 Rare edition of this famous work, considered the first treatise on dietetics and gastronomy given to the press, actually the first cookbook ever printed, and whose title in Italian sounds Il Piacere onesto e la buona salute. The De honesta voluptate et valetudine was printed for the first time in Rome by Ulrico Han around 1475, anonymous and without typographical notes. The first edition, dated - and almost contemporary - was printed in Venice on June 13, 1475, with the name of the author.

The work is based on one of the manuscript versions of  Libro de arte coquinaria, of the famous ancestor of all cooks: Master Martino from Como, who had been the personal cook of the Patriarch of Aquileia before 1461 and who was active at least until 1467, when the writing of the De honesta voluptate began, in which he is mentioned as a person still alive. By his own declaration, Platina shared with him experiments in the culinary art within a familiar atmosphere and mutual consideration and checked from time to time on the recipe book that Master Martino had put together around 1450, for his own use and probably for those interested in using it. The treatise, rich in recipes and advice, is not intended for large courts with their endless banquets - in fact, the module proposed by Platina is that of the three courses that include a debut with aperitif food and a final closing with others important enough to "seal the stomach".

Unlike most sixteenth-century cusine writers, Platina's recipe book is addressed to socially classifiable upper-middle class users: not to their mostly illiterate cooks but to their hosts, the Renaissance bourgeois elite who could - and felt the need -  enjoy the pleasures of the table at their homes with their contubernales. An attentive bourgeoisie, but far from the splendour of court banquets, linked to the aristocracy of commerce and shop. It is no coincidence that the involution of these mercantile ideals, together with the downsizing of the middle classes in the rigid social hierarchy imposed by the arrogance of the princes, coincided with the last editorial fortunes of Platina's work and with the advent of the great culinary treatise expressly intended for the use of the Courts, inaugurated by the Banchetti by Messisbugo and reaching its climax in 1570 with Bartolomeo Scappi's ‘Opera’.

A recipe by Master Martino in the Platina's book: Fried Zucchini
"Peel the zucchini and then cut sideways into thin slices. Boil them for a moment and when taking them out of the pan put them on a cutting board, where you will leave them until they are a little dry. Wrap them in white flour and salt, and fry them in oil. Then put them on the plates and pour over them a sauce made with garlic, fennel and breadcrumbs, minced in agresto (verjuice), so that the sauce is more liquid than thick. It would be good to use a sieve. Some people prepare it only with agresto and fennel flower. If you prefer it yellow, add some saffron. Drexel 296; Westbury 177( other buildings); Simon II, 521; Marciana 1236; B.IN.G. 1517.. The De honesta voluptate et valetudine, divided into ten chapters according to the classical tradition, is a precious source of information on daily life and Italian cuisine of the 15th century: from suggestions for sports to the importance of choosing a cook, from how to furnish the table at the ideal time to eat, from the best methods of cooking each food to the cultivation and classification of

Bartolomeo Sacchi, born in Piadena (in Latin Platina) near Cremona, was at the service of the Gonzaga from 1453, then in 1457 he moved to Florence to attend  Argiropulo’s lessons. In 1461 he moved to Rome, where at the time of Pius II he was chancellor stenographer of the papal court. A cultured and refined man, he was linked to the circle of Pius II's closest collaborators (Francesco Gonzaga, who had been his pupil in Mantua, Jacopo Ammannati Piccolomini, Cardinal Bessarione), he found himself directly involved in the conflict which, on the death of Pius II in 1464, saw the group of Pius II cardinals opposed to the new Pope Paul II. Platina thus lost the office of abbreviator and, because of his harsh protest, was imprisoned for the first time in 1464 on charges of lese majesty and then again in 1468, this time because he was involved, together with the group of Roman academics who gathered around Pomponio Leto, in a conspiracy probably set up against Paul II. On this occasion he was accused of heresies of Epicurean origin. Released from prison in 1469, he was rehabilitated by Pope Sixtus IV, who appointed him director of the Vatican Library in 1478. In those years he published the Vitæ Pontificum (1479), a work of extraordinary success that was reprinted countless times until the seventeenth century, both in Latin and in the Italian version. Platina died in Rome in 1481.

This website uses cookies to improve your experience while you navigate through the website. Out of these cookies, the cookies that are categorized as necessary are stored on your browser as they are essential for the working of basic functionalities of the website. We also use third-party cookies that help us analyze and understand how you use this website. These cookies will be stored in your browser only with your consent. You also have the option to opt-out of these cookies. But opting out of some of these cookies may have an effect on your browsing experience.
Necessary Always Enabled
Necessary cookies are absolutely essential for the website to function properly. This category only includes cookies that ensures basic functionalities and security features of the website. These cookies do not store any personal information.
Non-necessary
Any cookies that may not be particularly necessary for the website to function and is used specifically to collect user personal data via analytics, ads, other embedded contents are termed as non-necessary cookies. It is mandatory to procure user consent prior to running these cookies on your website.
SAVE & ACCEPT